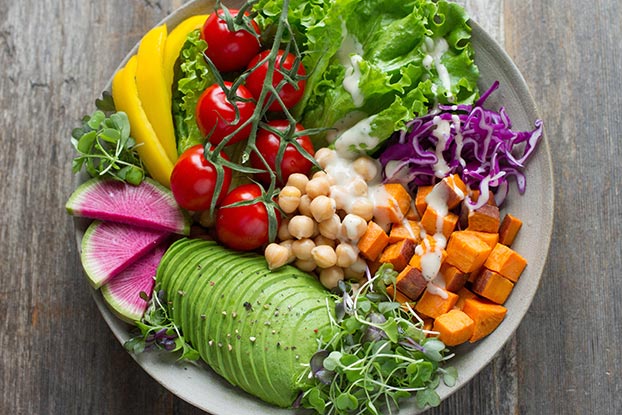 Traveling to a foreign country can be hard if you need to follow certain dietary restrictions, or just want to for ethical reasons. To the eyes of many, Rome is the home of amatriciana or carbonara pasta, foods that contain meat, eggs, or both. However, Rome is so much more than this. As of 2018, progressive cuisine has reached the Eternal City as well. With time, we’ve been able to master vegan and vegetarian options and include them in our everyday menus. For this reason, we’re excited to share with you some of the best vegan places in Rome. In our opinion, of course.

Note: this is a list that reflects our personal preference, and it’s in no way paid advertisement.

The location of this restaurant is very convenient, as it’s only a 2-minute walk from the B line metro stop Piramide. Once inside, you’ll find a café and a large room filled with tables (there are tables outside as well). In the center of the room, there’s a self-service buffet of hot and cold homemade treats waiting for you. Everything they serve is organic, and strictly vegetarian or vegan. The unique thing about this restaurant is that you spend depending on how much your food weighs. In fact, you’ll find scales that prints out a price receipt for you, after weighing your plate before returning to your table to eat. Students and people who get there on a bike usually get a small discount on the final check.

This place is less than five minutes away from the A line metro stop Ottaviano, near the Vatican. Everything they serve at this store is vegan, mainly burgers in a bun. What’s so unique about this place is that every burger bun is super colorful, with a range of colors that goes from lime green, to magenta, to teal. Furthermore, they have seasonal burgers in different colors depending on the time of the year.  All these qualities make it one of the best vegan places in Rome.

Rifugio Romano is located near Rome’s Termini station. What they try to do at their restaurant is blend traditional Roman and vegan cuisines together. There, you’ll be able to find a vast (green) menu section dedicated to those who want to go for a vegan option, but there’s also a large non-vegan section for the omnivores ;).

In the Termini station area, Grezzo is one of the best ice cream places we’ve ever tried. The idea of this vegan gelato place came from the need to create something that everyone could enjoy. In fact, the only ingredients present in their mixes are natural ones, with coconut sugar as the only sweetener. Truly one of the best vegan places in Rome if you like sweets. If you’re not in for the gelato, you’ll be able to find many treats made with raw chocolate and other fresh ingredients.

You can find this pastry shop (that sells mainly ice cream) near the A line metro stop Ponte Lungo. There you’ll notice a few tables both inside and out of the shop, suitable for the ones who want to enjoy their snack sitting down. They have seasonal flavors, depending on the period of the year and which products are available as ingredients. In addition to having a vast variety of vegan choices, they also have flavors for people allergic to gluten and those suffering from diabetes.

If you are a cat person, this place is for you! This vegan bistro is located near Ostiense train station and B line metro stop Piramide, you don’t wanna miss it during your stay in Rome. Romeow Bistrot hosts several cats that will roam around you, as you eat homemade vegan snacks. You’re able to pet the cats, as long as they come to you and you don’t bother them in their sleep. This space only offers vegan choices, and in between dining hours you’ll have the option of stopping for lunch or dinner.

We hope you enjoyed reading the list of vegan places in Rome we made for you. Let us know in the comments if you know any other great vegan place in Rome to add on the list! If you are coming to Rome soon, take a look at the walking and sightseeing tours of Rome that we offer!