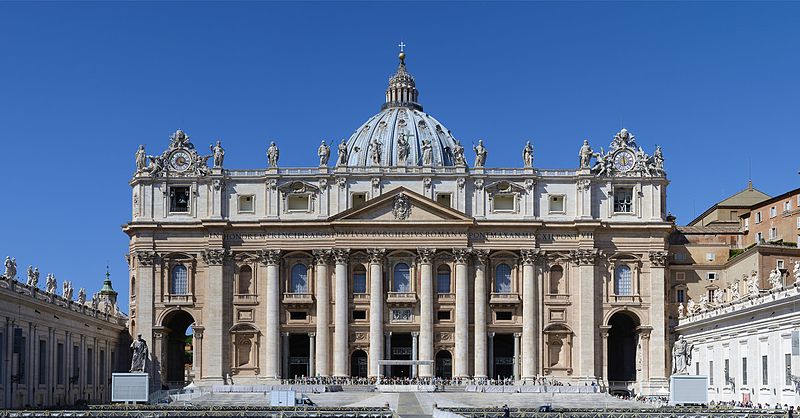 It took 120 years to build the Major Papal Basilica of Saint Peter in the Vatican (from 1506, with Pope Julius II, to 1626, with Pope Urban VIII). It was built on the site where another basilica had been previously built by the Emperor Constantine I in the 4th century AD; according to the tradition, that was the place where Saint Peter was buried after he was crucified upside down upon his request.
There is a long list of artists and architects who gave their best to build what is considered the heart of Catholisism, from Michelangelo Buonarroti and Raffael Sanzio to Bramante and Antonio da Sangallo, all the way to Gian Lorenzo Bernini, who was responsible for the baldachin guarding the holiness of the high altar and the square in front of the basilica, surrounded by the colonnade that still celebrates his memory. On the façade, which is about 114.69 m (376.3 ft) wide and 45.44 m (149.4 ft) high, there is the “Loggia delle Benedizioni”, from where the election of the new Pope is announced. In the center of the St. Peter’s square there is an ancient Egyptian obelisk that used to stand on the spine of the circus of Nero, where St. Peter was crucified, the obelisk is considered holy because it is the only witness to St. Peter’s death as he was executed about 40mt (130ft) away from it.
The ground surface of Saint Peter’s basilica is over fifteen thousand square meters, while its total length is 187.36 m, 90 of which are occupied by the central nave. Among the various works of art enhancing the interior of the basilica there is the Pietà, superb masterpiece sculpted by Michelangelo, who also designed the dome of the basilica, which has become one of the most famous images in the world. There are numerous tombs of Popes, saints and cardinals, and of course you can not visit the Basilica without going down to the catacombs where St. Peter was buried. Also from the Basilica you can access the Vatican Museums (one of the most important museums in the world) and Sistine Chapel to admire the ceiling frescoed by Michelangelo himself.
The dome of St. Peter’s is the highest structure in the city of Rome, and by law, no other building can be taller than The Dome. It is a very popular tourist attraction and hundreds of thousand of tourists climb the dome every year, you can buy the ticket to climb the dome inside St. Peter’s, but keep in mind that if you want to pay extra and take an elevator it will not bring you all the way to the top, but only one third of the way, and you will still have to do over 200 steps.