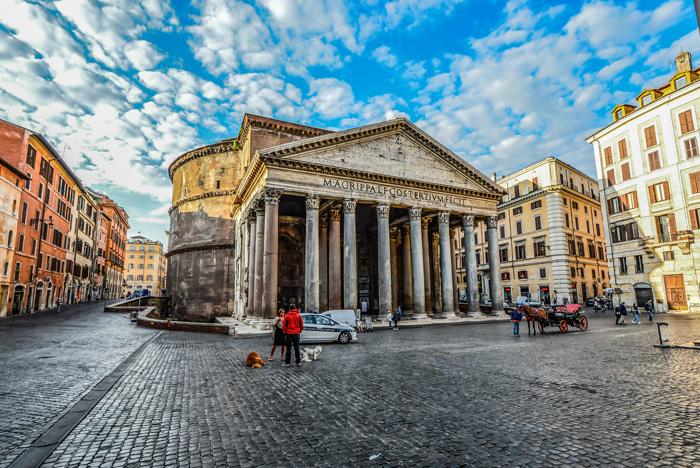 Pantheon is arguably one of the most iconic buildings of ancient world, but there are still few things about this place unknown to majority of people.

1. Although the inscription on the facade reads “Built by Marcus Agrippa” the building that you see today was built by Hadrian around 126AD. The Emperor was a pretty humble man so he had kept the original inscription from 19BC

2. The Pantheon was the largest pagan temple of the ancient world dedicated to all Gods, but it was converted into a Christian church in the 7th century.

3. Pantheon is one of the best preserved ancient Roman structures, it’s been in continuous use throughout its history.

4. The official name of the Pantheon is: Saint Mary of Martyrs.

5. Raphael Santi, probably the best painter of the Renaissance, was buried in the Pantheon. Remember: “From Santi’s earthly tomb with demon’s hole”? Angels and Demons by Dan Brown.

6. The “Demon’s Hole”.  Large circular opening in the dome of the pantheon is often called a demons’ hole, because of the legend according to which the pagan demons escaped through this hole when the church was consecrated in 609AD. The actual name of this hole is Oculus, which means a big eye, it is the only light source of the building, it also has another function-you can call it Impluvium or rain collector.

7. Twentie eight cartloads of relics of martyrs were translated to the pantheon on 13 May of 609 from the Catacombs and buried there.

8. The roof of the pantheon was covered with bronze tiles, but in July of 663AD the tiles were removed by the Emperor Constantine II and shipped off to Constantinople.

9. In the first half of 17th century the original bronze ceiling of the portico was stripped and used to build the famous baldacchino in St Peter’s Basilica by Bernini.

Uncover more secrets of Pantheon on our Must See Rome Tour