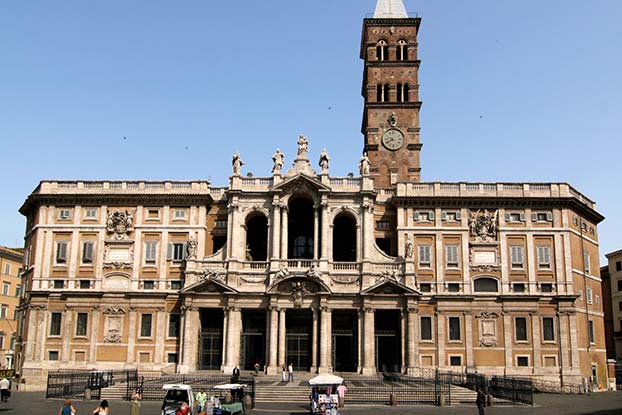 There is a church on the Esquiline hill, in Rome, called Santa Maria Maggiore or Saint Mary Major. This church is one of four major papal Basilicas and the largest Marian church in Rome. Every year, on August the 5th something strange and beautiful happens around this fascinating church: white rose petals fall from the domes of the Basilica, at that magical moment it looks like it is snowing in the middle of summer.

So what’s the story? Why do people throw white petals from the rooftop of Santa Maria? Well, it’s an old story that’s ought to be told.

In the 4th century AD, just a few years after Christianity became legal in Roman Empire, there was a married couple: Giovanni and Maria. They were rich and they loved each other very much, the life was beautiful except for one thing: they couldn’t have kids. No matter what they tried Maria could never get pregnant. When all hope was lost, they decided to ask Virgin Mary for help. So as they prayed, all of a sudden, Mary appeared before them. Desperate and frustrated they told her:”Oh Mary, you are the mother of all, you are wise and all mighty, please help us. We are willing to give everything away, to dispose of all our wealth in order to have a child.”
To which Mary replied:” Wait for the sign.”

So they waited and waited, and one night she came to them again, but this time in their dreams. Both Giovanni and Maria had the strangest dream ever, they dreamed of Virgin Mary who was telling them that it is going to snow on one of the seven hills of Rome, and that it is going to happen on August the 5th.

Early in the morning, at the very crack of dawn, our couple went looking for the snow, and how huge was their amazement when finally, on top of Esquiline hill, they found it. The snow! They also found the man who they knew well, the leader of their community, the Bishop of all Rome, The Pope! Yes, the Pope Liberius was there drawing something in the snow with his staff. They fell to their knees before his Holiness and asked him:” Our father, what are you doing here?”
“I had the strangest dream last night”- said the Pope. Virgin Mary came to me and told me to built a temple in her honor, where it snows. So I found this place today, covered in white snow, and that’s where I am going to build a great church.

The couple was astonished by his answer and told him that they were waiting for the sign from Mary, and basically had the same dream. Together, Pope Liberius, Giovanni and Maria started building what would become Major Basilica dedicated to The Virgin Mary. And thanks to the miraculous intervention they finally had a child.

This story is beautiful, but as it often happens, in the 1960’s, someone had to ruin the good story and find the truth. And the truth is that this church was built almost hundred years later, in fifth century, around the year 435 AD, after the council of Ephesus established the origin of Christ and Mary and declared her Theodokos or the mother of God.

Both stories are interesting, but of course, the first one is so touching, so romantic, it is something that many of us go through trying to bear a child. When all hope is lost we turn to God. And the story stuck in the minds of Romans for over 1500 years. It stuck so well that the official name of the church, until 1969 was St. Mary of Snow.

St. Mary’s is the only major papal basilica that was never destroyed, it had kept its original core.

The ceiling of the church had been rebuilt in 1500’s and the gold brought from America by Columbus was used to decorate it.

The relic of this church is of extreme importance to all Christians: Planks of wood from Christ’s manger.

Artists Pietro and Gian Lorenzo Bernini (the most important and prolific artists of Baroque period) were buried in the basilica.

The Basilica has two facades, one ancient that looks more like an ancient Greek temple, and Baroque facade on the other end.

Saint Mary Major is a little gem and it is located in the very center of the city, 5 blocks away from Termini train station.