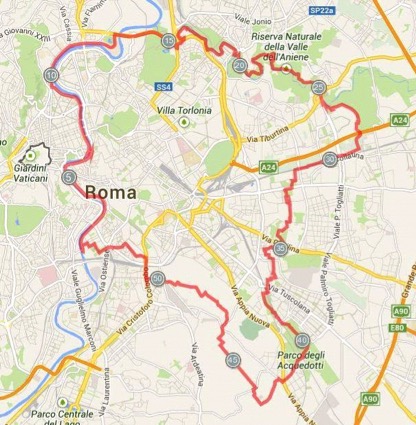 Rome on bicycle – The best way to see Rome.

Rome is one of the most beautiful cities in the world, but it is also one of the dirtiest and most polluted cities in Europe. The city is trying to fight pollution by limiting the traffic in the historical center, and by promoting the use of public transport and of course bicycles.

The longest cycling path in Rome is called GRAB, and it is 44km long. Those of you who have been to Rome might have heard of GRA, Grande Raccordo Anulare or Big Ring Junction it is a ring-shaped, orbital highway encircling the city, well GRAB is the same thing, but for bicycles it stands for Grande Raccordo Anulare delle Bici. It encircles the center of the city.

You can ride your bicycle along the Tiber or Aniene rivers, from Colosseum to the Appian way, from Vatican to the Jewish Ghetto, from the Triumphal Arch of Constantine to the Baths of Caracalla, or around the park of Appia Antica. Along the GRAB you can also find restaurants, bicycle friendly hotels, facilities, cafes, bike shops etc.

The plan is to build the worlds longest bicycle lane by connecting existing cycling paths and create one continuous, 44km long road for bikes only. It is still under construction for now, but 75% of GRAB is already paved and used by roman cyclists and tourists, so by the Summer of 2016 the works will be completed, and everyone should be able to just grab their bike and get on GRAB.

To explore Rome on bicycle is the best way to see the Eternal City.