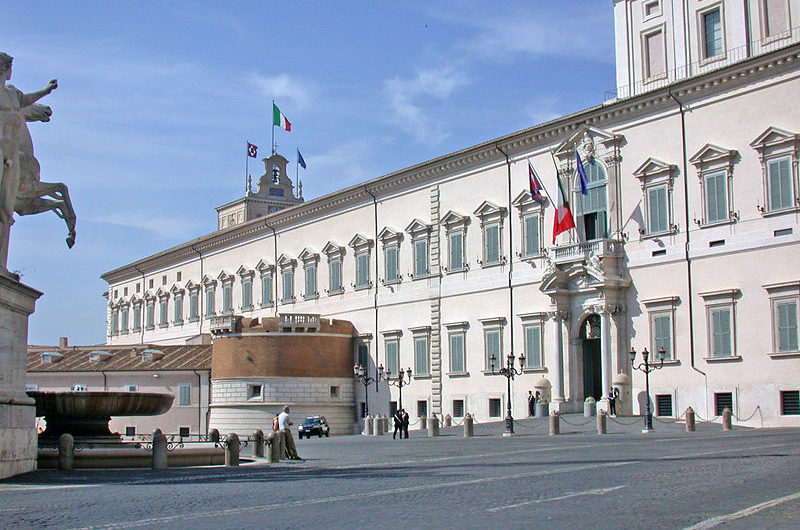 The Quirinal Presidential Palace, residence of the President of the Italian Republic and whose name comes from the hill on which it was built dominating part of the city of Rome, is one of the biggest palaces in the world (its extension is over 110 thousand square meters) and, for centuries, it had been the “home” of the Popes.
It is a majestic building and, since the proclamation of the Republic in 1946, it has become the official residence of the President of the Republic or The Presidential Palace – it had been the Royal Palace since 1870.
Its safeguard and protection is entrusted both to security services and the Corpo dei Corazzieri (Cuirassiers’ Regiment): they are part of an elite military unit of the Carabinieri (Arm of Carabineers) and are the honor guard of the President. The minimum height for admission is 190 cm, or 6’2”. Their post – also hosting the cavalry squadron, which escorts the President during events in the city – is located beside the Presidential Palace.
The Palace has 1,200 rooms, among which there are the ones specifically prepared for Kaiser Wilhelm II (in Rome during 1888 and 1893); today, these rooms host head of States and royals visiting the President of the Republic.
The artistic patrimony that the Quirinal Presidential Palace holds in its rooms is also remarkable. However, some architectural elements must also be considered as artworks, such as the main staircase, overlooked by paintings from various periods. Among them, you can find a fresco by Melozzo da Forlì, one of the greatest exponents of the Italian painting from the XV century.
One of the Quirinal’s gems is the gardens, older than Versailles and extending for over four hectares. On June 2nd, Italian Republic day, the gardens are open to the public and on this occasion they are visited by more than twenty thousand people.