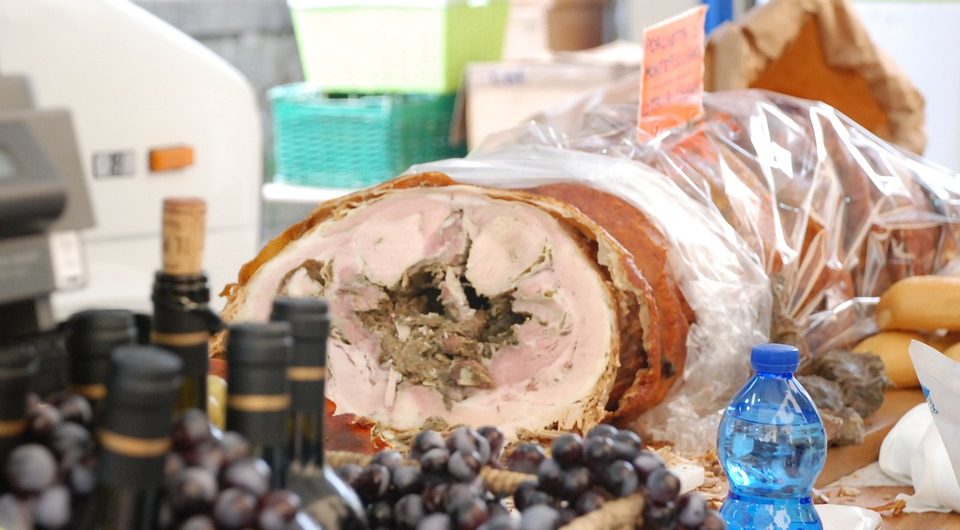 The Roman speciality that conquered the world.

The word “porchetta” comes from its male correspondent, “porchetto” (piglet). In ancient times, a relatively “young” pig was sacrificed as an offer to the divinities. Afterwards, people discovered that the female had a healthier and tastier meat, so they started using it. From that comes the name “porchetta”.
Its original location is unknown, but the citizens of Ariccia, in the Castelli Romani (Roman Castles) area, claim its paternity, which dates back to Roman and Etruscan times.
Today, we know that it is not just a Roman speciality, but also typical food in the Lazio region, and it also has some variants in central Italy, such as in Umbria, Toscana, Abruzzo, Marche and Emilia Romagna regions.
HOW IS IT MADE?
It is made from a female pig weighing about 100 kg, stuffed with salt, pepper and other spices, such as sweet cicely and rosemary. Ideally, it is cooked for 6 to 8 hours at a temperature of 200°/210° C. While cooking, its outer part becomes a crunchy and tasty crust, whereas the inside remains soft and melts in your mouth at the first bite.
You can enjoy it on a plate, like a regular steak, or with fresh bread, in a delicious, fragrant stuffed panini.
In order to fully enjoy its flavor and the aroma of the spices, try it warm.
WHY TRY IT?
Ariccia’s porchetta received the IGP (Geo Protected Indication) stamp.
It is not heavy in calories because while it’s cooked, fat melts and it is collected and eliminated.
The porchetta was elected by the New York Times as one of the five world best-tasting foods. In Canada, there are contests to celebrate it. In America, porchetta is considered a healthy alternative to junk food.

You can try real Roman porchetta in Ariccia.