Pizza Margherita – The Queen Of Pizza

Pizza Margherita – The Queen Of Pizza 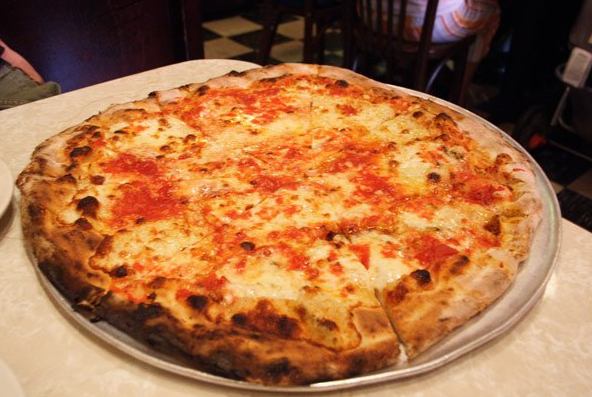 The birth of Pizza Margherita.

Pizza is one of the most ancient recipes in the world and definitely the most popular one. Ancient Greeks, Etruscan, Persians and Romans thousands of years ago, had dishes similar to our modern pizza, flatbread with different toppings, both sweet and savory.

The modern history of pizza begins in the end of 19th century, in 1889 to be exact, in the city of Naples.
Queen Margherita di Savoy together with her husband The king Umberto Primo di Savoy come to Naples. They come to Naples to improve their image, to show that they are close with their subjects and, of course, to see how people live and to taste some local foods. That is when the Neopolitan pizza was discovered by the royal couple. It was cooked for them by Raffaelle Esposito, chef of the restaurant Brandi, the pie resembled the Italian flag and was named in honor of the new queen – Margherita. The ingredients are really simple: fresh tomatoes(for red), mozzarella cheese(for white) and fresh basil leafs(for green). The queen fell in love with the dish and took the recipe back home, to the north. This was one of the greatest culinary discoveries of the 19th century.
At the same time massive wave of Italian immigrants hit the Americas and Australia, and of-course they brought the recipe for this delicious flatbread with them, but Americans, Canadians and Australians had found it to be too simple(poor) for their taste, and pizza, at first, had a really hard time taking off. And that was until the end of 1940’s when American, Canadian, British, Australian soldiers who were stationed in Italy, returned to their respective countries, and said that we want to have our pizza here at home.
Pizza is a symbol of Italy just like a beaver is the symbol of Canada or a kangaroo is the symbol of Australia, thousands of food tours are available to tourists to try hundreds of different kinds of pizza made in Italy. Pizza here is pretty simple, two or three ingredients, and two kinds of base: red or white (with tomato sauce or without). To find a good pizzeria, look for a restaurant with a wood burning oven. It comes in different shapes and sizes thin and thick, dry and wet, crispy or juicy, “a palla” (long with different flavors), “a taglio”(sliced) or tonda (pizza pie), but it’s all great. Also try it for dessert with nutella or honey and nuts.