No matter if you’re a tourist or a local, if you’ve been walking around the center of Rome chances are that, in the middle of the day, you’ve heard a loud bang coming from the area. What you’ve been hearing every day at noon is a cannon. Yep – a cannon located right on top of the Janiculum Hill, near the Trastevere neighborhood. 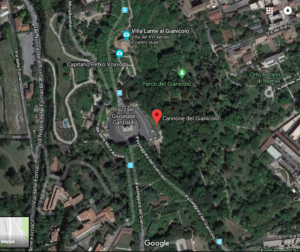 Map showing the exact location of the cannon on the hill.

Coming from a mainly Christian tradition, Rome is clearly full of churches. It’s always been a custom for them to ring their bells once the clock struck noon. This was a useful habit for people to keep up with time, since clocks were then too expensive to own. The only problem with churches’ bells ringing was that they never rung at a unison. For this reason, starting from 1847, Pope Pius IX introduced a cannon that would shoot at noon sharp every day. The cannon, however, hasn’t always been located on the Janiculum Hill. In fact, until 1903, the cannon did its job from Castel Sant’Angelo, a place located along the river Tiber. It then moved to Monte Mario for one short year until it found its final operating center on the Janiculum Hill in 1904. 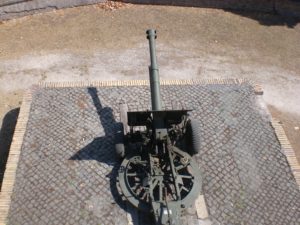 The cannon on the hill.

Understandably, the conflicts happening during WWII relieved the cannon of its duties. The Eternal City was deprived of its clock until April 21st 1959, 2712th anniversary of the foundation of Rome. Since then, the cannon hasn’t taken a day off and it gathers tourists, locals, families and children. Just a few minutes before noon, they’re all ready to watch the short but significant show. 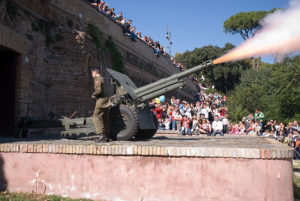 The cannon firing its shot at noon.

Have you ever heard the cannon going off while visiting Rome? Tell us all about it in the comments! And don’t forget, we offer tours and trips that uncover all Rome’s secrets, check them out!