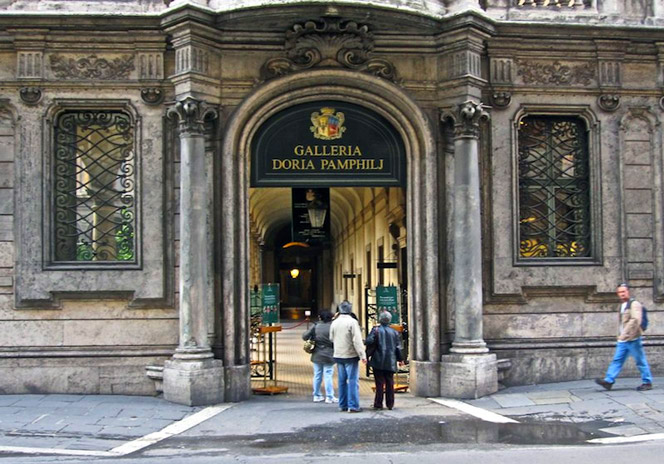 One of the largest art galleries and palace in Rome is the Doria Pamphilj Palace.
It houses a staggering number of paintings and furniture that the noble family Doria Pamphilj, started collecting in the 16th century at the apex of their glory and highest position in the society.
In its ranks, the family counts the pope Innocent X and several marriages that tied them to royals all over Europe and made their fortune and their noble name still a reality in this day and age.

Its entrance is locates right in Via del Corso, in the heart of the Eternal City, and is the largest privately owned gallery and palace still existing in Rome; its historical importance makes it a hot spot on the map of your trip through the culture and beauty of history.

The palace itself has been renovated several times throughout the centuries growing into a majestic estate counting luxurious apartments rich in Byzantine and Medieval pieces of art and furniture, the magnificent closed courtyard surrounded in all its sides by astonishing galleries housing priceless masterpieces and even the private family chapel complete with the mummified corpses of the family Saint.

Opened to the public by the later descendants of the family, everyone has now the chance to lay their very eyes on Caravaggio’s paintings such as Penitent Magdalene and The Rest on the Flight into Egypt, Raffaello’s Double Portrait along with Tiziano’s Salome with the Head of St. John the Baptist, the portrait of Pope Innocent X by Diego Velazquez and travel down through the journey that sees art develop by the hands of other masters such as Guercino, Filippo Lippi and Parmigianino.

Its grand apartments are still in use by the family members, living in this triumph of art and culture, but few of the rooms are open to the public as it is the enchanting chapel designed by Carlo Fontana and retouched numerous times and enriched by different artists who gave their invaluable touch to this shrine of spirituality.
And in the still, quiet beauty of the reliquary, lies the perfectly preserved St. Theodora whose remains rest upon the altar that contains the relics of a martyred saint who it is said to be one of the Centurions present at the crucifixion of Jesus.

So make sure to visit the one and only Doria Pamphilj Palace in Rome and drink in the splendor that its walls hide.