Colosseum The Greatest Arena In The World

Colosseum The Greatest Arena In The World 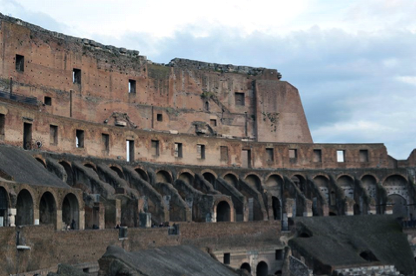 Colosseum is one of the most famous buildings in the world, and one of the favorite tourist attractions in Rome, the word “Colosseum” is just a nickname that stuck for over 1900 years.

Official name of this marvel of architecture and engineering is Flavian Amphitheater or Anfiteatro Flavio, because it was built by the Flavian dynasty.

To tell more about Colosseum we have to start with Nero, one of the most hated and controversial emperors of Roman Empire. In the year 64AD the city of Rome was ravaged by a great fire, almost two thirds of the city was completely destroyed, and the only person to benefit from that, was Nero, as soon as the smoke has cleared he began construction of his “Domus Aurea” or “Golden Palace”, it was a magnificent palace covered in gold, it had rotating dining rooms, gardens and an artificial lake.

Few years later Nero was declared the enemy of people and the state, and was to be executed, but on June 6, 68AD he committed suicide. The Golden Palace was partially demolished, and the artificial lake was drained.

In 72AD Emperor Vespasian began the construction of his new amphitheater right on the bottom of Nero’s artificial lake. The construction was completed around 80AD by Emperor Titus, and some modifications were made later on by Emperor Domitian between 81 and 96 AD. All three emperors came from the Flavian Dynasty, hence the name “Flavian Amphitheater”.

But why do we call it Colosseum? Well, Nero erected huge statue of himself at the entrance to the Golden Palace. The statue was designed and built by the Greek architect and sculptor Zenodorus, it was 30 meters (99feet) tall and made of bronze and gold. The statue was called “Colossus Neronis” or The Colossus Of Nero.

The Romans loved the statue, they used to say : “Quandiu stabit coliseus, stabit et Roma; quando cadit coliseus, cadet et Roma; quando cadet Roma, cadet et mundus” (As long as the Colossus stands, Rome will stand, when the Colossus falls, Rome will also fall, and when Rome falls, the world will fall with it.) So after Nero’s death the statue was spared, and eventually moved closer to the Flavian Amphitheater by emperor Hadrian (using 24 elephants), and people started calling this place Colosseum. The statue was converted into the statue of Sol(the sun god), and later many succeeding emperors simply changed the head of the statue to represent them. We are not really sure what happened to the Colossus, but most likely it was destroyed by an earthquake, and the metal recycled.

So that’s why we call this magnificent arena “Colosseum”.