Christmas in Rome: the Magic of Tradition

Christmas in Rome: the Magic of Tradition 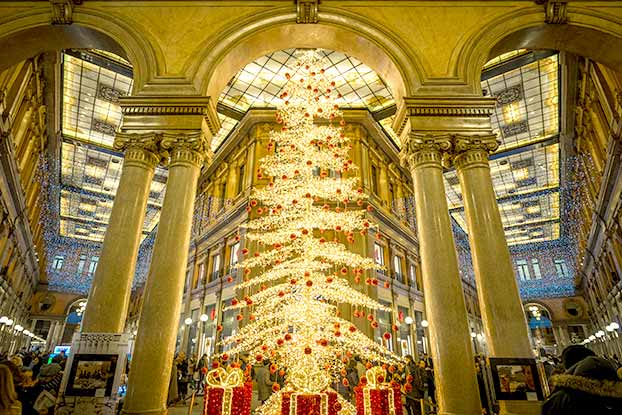 If you booked your trip to Rome during Christmas time, you’re in luck! Of course Rome is stunning at any time of year, but on Christmas, Rome is full of magic that will make your stay unforgettable. Read on to learn more about the Christmas season in Rome, as well as Christmas traditions, Christmas food and the most beautiful places you must visit on your Roman holiday.

Take a stroll around the historical center of Rome, and you will soon realize that Christmas in Rome is not just a about pretty lights. What makes the atmosphere so special is the people, the mood, the smells and decorations. The stores are all decked out and full of people in a rush to get their Xmas shopping done. Crazy Roman traffic gets even crazier, and the police don’t seem to care. A mouthwatering aroma of roasted chestnuts, and caramel coated nuts, fill the streets. The city seems to be transformed into Christmas wonderland, and you wish it never ended. This is what your Roman experience will be like when you spend Christmas in Rome. Only one thing is missing on Christmas in Rome, the snow.

Myriad of small and big shops open up for the season. From small kiosks, to entire markets dedicated to the Christmas presents, toys and decorations. In most of these Christmas markets and shops you will find handcrafted souvenirs ranging from baubles, stars and angels to pottery, glassware and hand-carved wooden Pinocchio dolls, toy Vespa scooters and Fiat 500’s. The most famous and central Christmas market is in Piazza Navona, this square is arguably the most beautiful in the world, and the market makes it just mesmerizing. After a few years of closure, the market is back and will remain open until January 6th. Navona Christmas market is not the only one opened for the season, here is the list of the best and the most accessible Christmas markets in Rome:

Italians love two things: their food and their families. If you don’t know that yet, you’ve probably lived under a rock for a long time. All jokes aside, as Italians (and Romans especially), we truly care about celebrating traditions while surrounded by our loved ones. Christmas in Rome can be hectic, but we always find the time to relax and share a meal. Some of the typical foods we’ll have are Pandoro, Panettone and Torrone. If you’ve never tried them, please give them a go because they’re so worth it! You can find them at any supermarket during the holidays. Another tradition that used to be much more important in the past is going to the Christmas Eve’s midnight Mass. It’s definitely an experience worth your time, you can even attend The Holy Mass in the Vatican, but make sure you get the tickets first!

ALL TICKETS TO MASSES AND PAPAL AUDIENCES ARE FREE OF CHARGE! Click here to get official Vatican Mass tickets.

Christmas in Rome: The Trees

If you are in Rome for Christmas, the chances are you are going to see plenty of Christmas trees, but there are two trees that really stand out. The most beautiful tree, hands down, is in Saint Peter’s square. The tree is Italian fir, and it’s donated to the Holy See by one of the Italian regions. This year the tree had been given to the Vatican by Friuli-Venezia-Giulia region.

The second famous Christmas tree is in Piazza Venezia, this one, as you might already know, is a hit and miss. Last year the tree was so bad that it had to be replaced. This year the tree for Piazza Venezia is paid for by Netflix. Aaaaand it’s not looking too good either. The tree came “disassembled”, as the limbs broke off during the delivery.

The most important, and usually the most beautiful Nativity Scene is found in Saint Peter’s square. This year it’s going to be very special. Presepe (Nativity Scene) this year weighs 720 tons, measures 18 feet by 52 feet (5.5 metres by 18 metres) and it’s entirely made of sand. It was crafted by three talented sculptors from Holland, Russia and Czech Republic. The sand has been quarried in the town of Jesolo (province of Venice), it was trucked in in the beginning of November.

Read more about the Nativity Scene at St. Peter’s here.

As you can see there’s a lot to see and do around Christmas time in Rome. Go out there and enjoy the magic of the most wonderful time of the year!