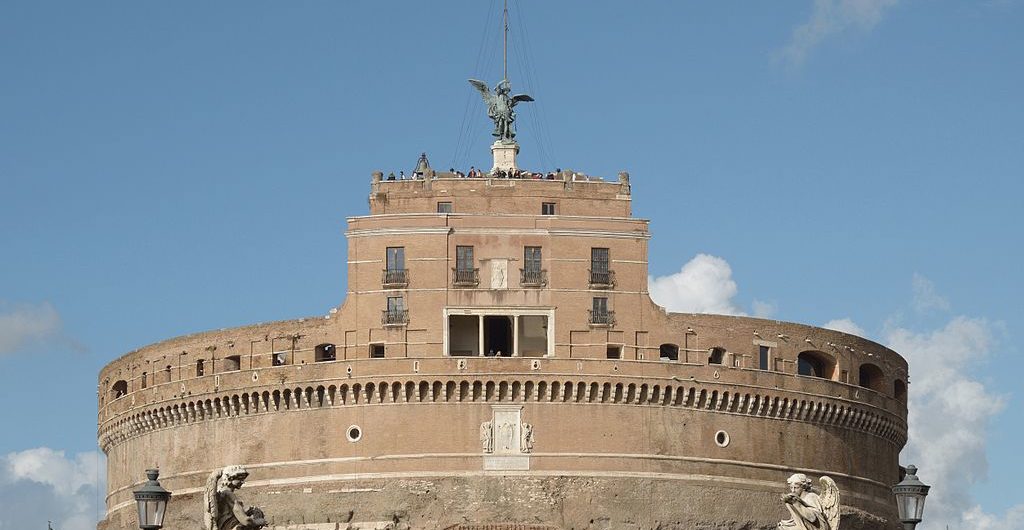 The best preserved castle in Rome

From its first construction (in 139 A.D) to today, Castel Sant’Angelo (Castle of the Holy Angel) has been a fortress and a prison, a place of miraculous appearances but also the papal residence and the headquarters of very important departments (such as the Secret Archive, which was miraculously saved from attacks and sieges), during the centuries where the Church exercised its spiritual and temporal power. But for those who love the opera, it is also the place of Tosca’s tragic ending; she seeks death throwing herself from the walkway because she cannot survive the love of her life.
Today, Castel Sant’Angelo is one of the most visited monuments in Rome, and it owes its charm, as well to the place where it stands, to the magic aura that seems to come out of its stones, carved centuries ago by the artisans for whom Rome was well known outside the Vatican’s and Italy’s borders.
One of the aspects attracting thousands of tourists and students every day is the “Passetto” (“Passage”) that connects the site to the Vatican Palaces; over the centuries, lots of legends were born around it, such as the ones about Pope Alexander VI (Pope Borgia or Borja, according to the original Spanish writing) who used it when he wanted to leave, for a few hours, the sacredness of Saint Peter’s holy rooms. In fact many Popes, throughout ages used this castle as their hiding place, a fortress or summer residence.
The castle is like a huge layer cake or a slice of archaeological lasagna if you will, the lower half was built in the second century AD by the emperor Hadrian to be his family tomb, and the upper half was added by different Popes at different times. Castel Sant’Angelo or the Castle of The Holy Angel owes its name to one strange event that took place in the year 590. The city was ravaged by the plague and when all hopes were lost and the population of the Eternal City was on the brink of extinction, Pope Gregory The Magnus had a vision of Archangel Michael sheathing his sword on the roof of the castle, the next day plague stopped and the city was saved.
The bridge connecting the mainland Rome with the castle was originally built in the year 133AD to allow Hadrian to cross the river to visit his family mausoleum, but on a Jubilee year of 1450 the bridge collapsed under the weight of the pilgrims killing over 400 people, it was eventually rebuilt and decorated; In 15 hundreds two statues of St. Peter and St. Paul (patron saints of Rome) were erected and later on, in 17th century Bernini produced beautiful statues of Passion of Christ, which still decorate the bridge today.
Little square in front of the bridge was the favorite place in the city to hold public executions- the most popular public event for Romans. Public executions attracted people from every corner of the city, it was a quality time for the whole family. Parents had a chance of teaching their young-ones about the gravity and the consequences of breaking the law.
The castle is definitely worth a visit, it is beautifully decorated, perfectly preserved and inside you can find papal bedrooms, offices, libraries, a treasury and ancients dungeons.