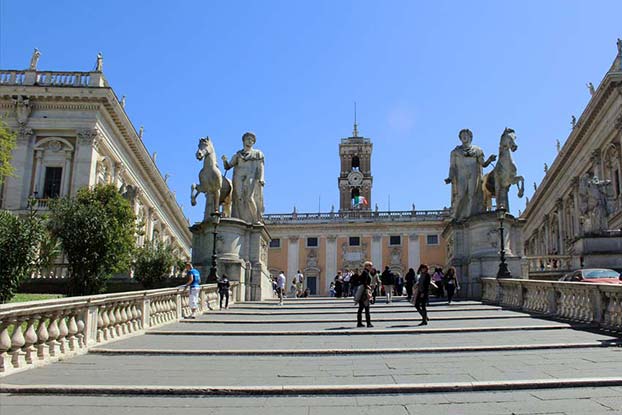 Since the beginning of Rome’s history, the Capitoline Hill has been the center of all the city’s power; it was chosen based on the position of dominance the hill had overlooking the vast valley Rome was just starting its life on.
The Capitoline hill was not the highest amongst the seven hills the city is founded on, yet the Romans built the most important of their temples for the God Jupiter on top of it and used it to celebrate their victories with triumphant ceremonies that culminated with rituals dedicated to their deity.

As the Dark Ages brought destruction to culture, the Capitoline was not spared, it was sacked and destroyed, and for a long time it was left unchecked and ignored, so much it became nothing but a field overgrown with grass where goats would spend their days grazing; and even when civilization came back to it, its role shifted to the one of a market place and the ancient ruins served the purpose of “supporting” the stalls and structures of the market.

Finally its status was restored when the Campidoglio went back to be the core of power it was meant to be, starting by being the city’s administrative center toward the year 1000 and seeing new buildings growing around its wide square currently still in use by the Mayor of Rome.

But what made the Capitoline so magnificent is Michelangelo’s touch. In the year 1500 Pope Paul III decided to hire the artist giving him license to use his genius as he saw fit to restore the Campidoglio’s beauty.
And so it was Michelangelo who completely rebuilt the old palaces on the hill and added new ones. The artist enlarged the square and used his great talent to give Rome one of the most beautiful piazzas with a magnificent view of piazza Venezia and Roman Forum.

So the history of the Campidoglio had seen days of greatness and darkness but in the end it became the center of political power matching the majestic St. Peter, the heart of the religious power.

We visit the Capitoline Hill on our Aperitivo Tour!

Previous postAperitivo or Italian Happy Hour
Next postSecrets of Pantheon