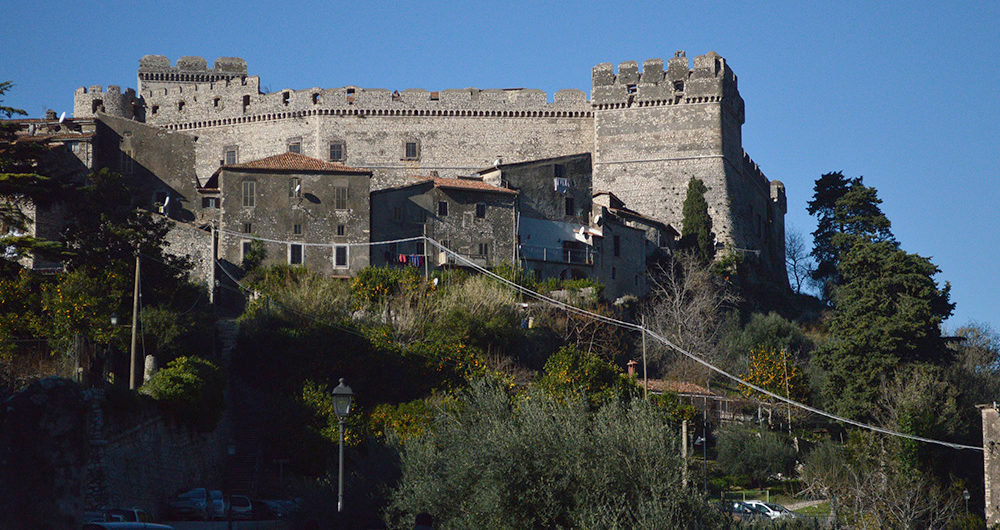 Castello Caetani is situated in the little, medieval, hillside town of Sermoneta, in the province of Latina.
The first to have lived there was The Baron Annibaldi, who was in charge of not only the town of Sermoneta, but of all towns and villages in the vicinity, under direct order from the Holy See.
The castle consisted of a fortress, where people lived their daily lives, a church, Saint Peter in Corte, and a cistern to collect rain water. The Barons had also built two towers : “Il Maschio” 42 meters (140′) and a smaller counter-tower.
Due to the financial problems of the family, in 1297, the Count of Caserta, Pietro Caetani purchased all their lands and properties, and very soon it became known as Castello Caetani or Caetan Castle.
The Caetani family had decided to enlarge the castle and built the “Sala dei Baroni” or The Hall of Barons, used for business meetings to conduct their feudal affairs.
In 1470 Pope Honorius II commissioned the frescoes with mythological themes, in few rooms of the castle, called The Painted Rooms or “Camere Pinte”.
In 1499 Pope Borgia excommunicated the Caetani family and expropriated all their lands. The new fortified walls were built around the castle, the towers were also rebuilt, and the church was demolished. Now the castle was a property of Borgia’s kids Cesare and Lucrezia, where the latter lived for many years.
After the death of Pope Borgia, all lands and properties were returned to the Caetani family, but the castle had lost it’s strategic importance, and was abandoned, sacked and finally became a military warehouse. And only in 1800 the castle was restored and became public property.
The Caetani Castle is a very popular tourist attraction, located 40 minutes south-east of Rome in a picturesque, medieval town very well preserved and still inhabited today.